The project is for an overpass at the intersection of Cotton Flat Road and Interstate-20 in Midland County. Of the hundreds of projects submitted by state departments of transportation across the United States, this project was been chosen as a recipient of highly sought-after grant funds.

Midland-Odessa Transportation Alliance (MOTRAN) President James Beauchamp said, “We are thrilled to hear that we will be, again, receiving BUILD grant funds for an important Permian Basin project. Interstate 20 plays a tremendous role in freight movement in the region for the energy sector and is a critical connection between Midland and Odessa. These funds will help leverage hundreds of millions in existing state and local investment for the rebuild of I-20.”

Beauchamp was quick to give credit to the regional community leaders and entities in coming together as the reason for these successes with Build Grants in the Permian Basin. “The awarding of these funds is no accident. It is a direct result of the local outpouring of support showing how important these projects are to our region and our state and national economies.”

MOTRAN submitted support letters for the BUILD Grant projects from elected officials throughout the Permian Basin including: 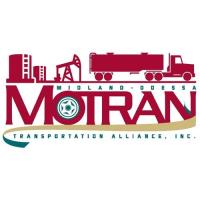